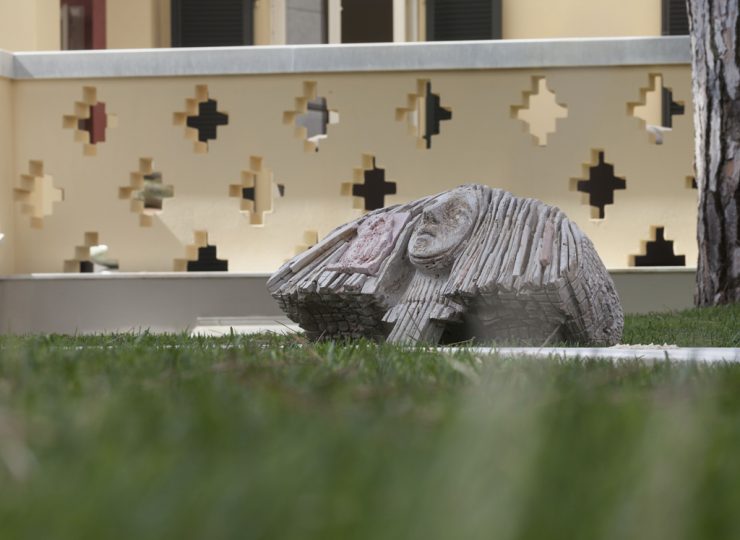 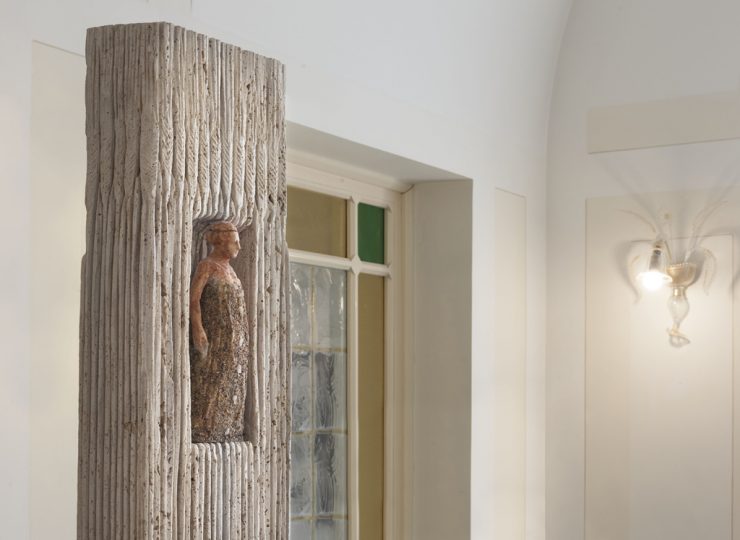 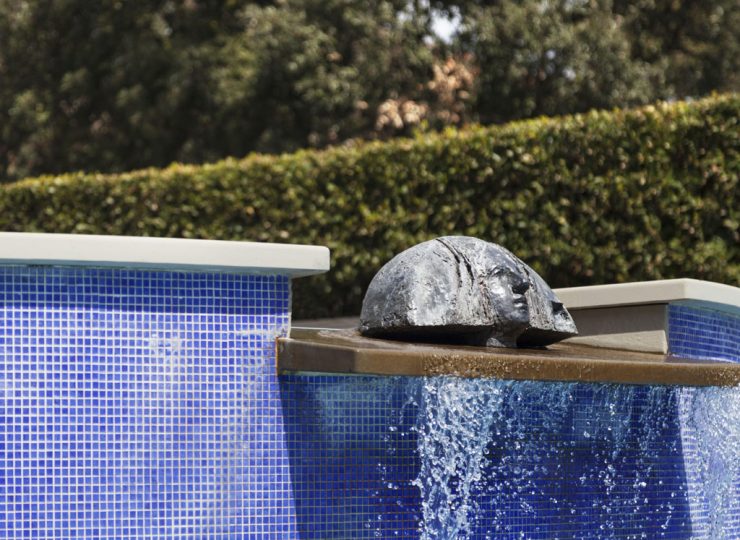 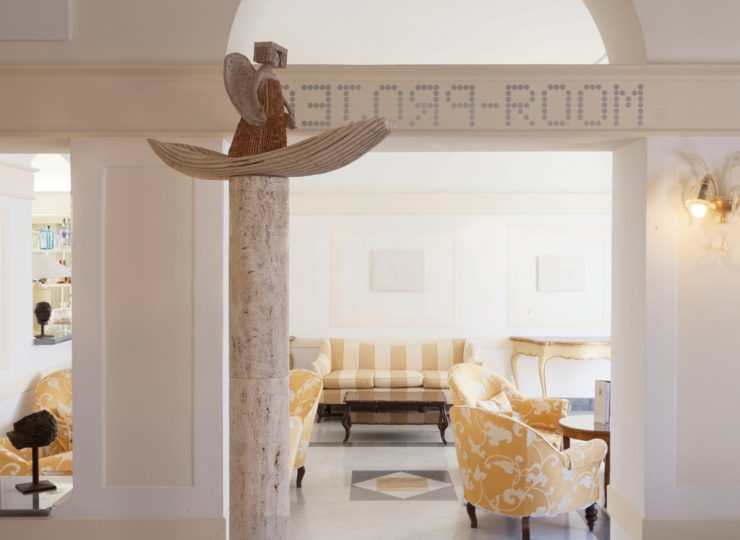 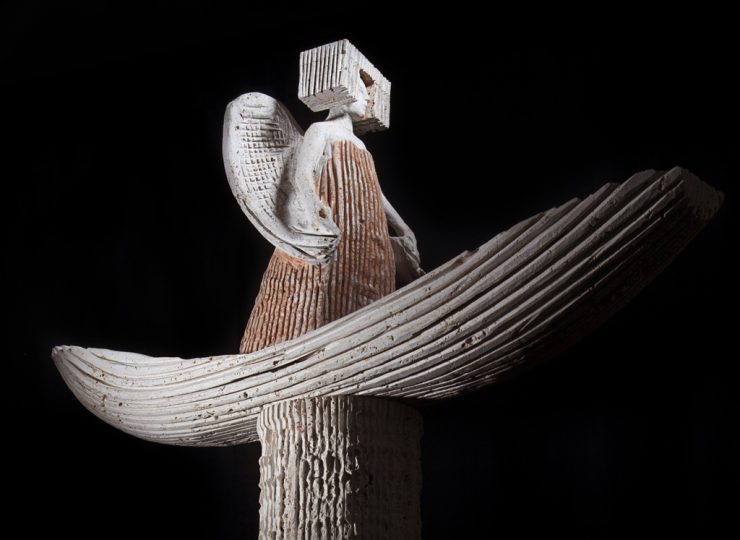 A quintessentially Mediterranean artist, Girolamo Ciulla uses sculpture and drawing to revive and sustain the historic memory of the source of Western civilizations. Ancient memory and a keen attention to traditional subjects are bound together in his work in a symbiosis. His work contains the syncretism characteristic of the koiné at the basis of Italian, Greek and Eastern myths and archetypes with deep roots in the African heart of all civilizations. The crocodile is one of his totemic animals, and not by chance. The creature appears on his columns, stone landscapes and indelible engravings composed of collective dreams and ancestral fears.

Ciulla has strong ties to his native Sicily. He was born in Nissa (in Sicilian) or Caltanisetta (in Italian), and as a boy he began by sculpting milestones, mnemonic signposts along the roads which punctuate the landscape like a metric system available to everyone, connecting distant places and unknown cities. But they were also a fertile reservoir of (relatively) free resources for someone who, every now and again, liked to use the material of sculpture to express his own visions.

But quite apart from the biographical details, it is significant that the artist began his journey in a land of multiple conquests and dialogue between cultures to arrive at a personal lexicon which has made him increasingly recognizable in the art world. Girolamo Ciulla, who has also built large-scale sculptures at Aswan in Egypt, has managed to find an immediate language to bring to life a Mediterranean universe whose centre of gravity is unmistakably his island. Testimony to this is his use of Sicilian travertine, still today his favourite material whose porosity makes it permeable to the air and at the same time gives it an “ancient” fragility. Because in this way Ciulla also represents time, the time of men and their ideas, but he also appropriates that of objects, even the most resistant which are slowly corroded by the hand of time. This visual-tactile aspect is one of the characteristics of his work precisely because his attention is focused on the constant connection between the present and the past. Of course there is nothing nostalgic here. Rather there is a search for the invariable, the inalienable features of a culture fed by movement, symbolic transmigrations, to borrow from Rudolf Wittkower’s major work. Images change and evolve in unlikely directions, the symbols themselves change in power and meaning when exchanged between different civilizations or consumed by beliefs. The image of Ceres, the goddess of grain and protector of Sicily, is symptomatic of a positive approach to sculpture designed to bring good luck. Like the milestones, he marks the passing of man, and a contemporary artist who works with traditional materials and techniques cannot fail to deal with this history. The sheaves of wheat that appear in many of his works, with or without the goddess, are unquestionably a sign of fertility but also lend a whiff of summer, the harvesting of work begun in winter, the conclusion of a process in which nature and culture collide. Because this is Ciulla’s message: to recall nature through its representation “from the perspective of the eternal” in forms discovered by man over centuries.

But the drawings are also important because they represent an essential creative connection between thought and hand. Drawing as an artistic practice and language has had a long gestation period as preparation for more important and complex work. Historically it has been seen as an aid to memory or as a practical exercise. In other words it has never been independent from fine arts like painting or pictorial technique in general. Drawing was always considered a supporting practice, a simple and less costly activity than painting or fresco, something which lived on its immediacy and spontaneity, with the characteristics of note taking. It was the work which made painting possible, a way to fix ideas, test the positions of the figures, find the best composition, or arrange the elements in a landscape. As a notebook or sketch-book it accompanied artists on their travels, especially in 18th and 19th centuries on the Grand Tour. As Europe began to explore Rome and the classical world, it offered an opportunity, given the lengthy travelling times of the period, to record landscapes, ruins, natural beauty. It was both a practical exercise and a way to collect images of the journey. For Girolamo Ciulla drawings have value for their own sake, they are not children of a minor God. And they are an integral part of the sculptor’s work with an important narrative function in that they show how the artist’s discourse has a special unitary character. Everything in his work is preserved, everything possesses an extraordinary choral quality, it belongs to art history and also to a contemporaneity which does not see escape into the future as a solution. And the idea of the drawing is also related to the idea of the cartoons which were dusted with red earth to trace the outlines of a fresco. The crucial difference is that Ciulla’s “cartoons” are engravings on stone filled in with ochre to depict mythological figures or ritual animals, bringing the stone to life.

And drawing is also related to bas-relief, for which Donatello was so renowned, where once again sculpture and drawing are subtly combined to produce genuine images which also have a sense of perspective. Vasari himself described them as “extremely difficult” because they lie at the very limits of sculpture’s possibilities. Ciulla also uses phrases or words, rediscovering the value of the sign as well as the drawing. The epigraph is not only one of the primitive forms of writing, but in antiquity was also the highest form of commemoration of people or events. Once again stone is testimony to a memory that is intended to last, not to survive but to become a living form in its own right.

Vertical columns and horizontal bas-reliefs are the two poles of the work which does not hesitate to measure itself against the classical world, seeking a contemporary canon which Ciulla has certainly achieved. His heads set on fluted or flat columns are not so much related to the herma, as to making explicit the relationship between the Greek column and man. Ratios and symmetries, golden numbers, the measurability of the world: Ciulla has inherited from the Arab-Greek world the idea of an ordered world in which art is part of a global conception of life. The past and its symbols are not survivors or expressions from another age, but living proof that our present culture has solid roots that are unforgotten. The classical will never wane because it belongs to all ages; it will remain a point of reference for ever. Time will never manage to destroy it, because ideas outlive men and their temples.